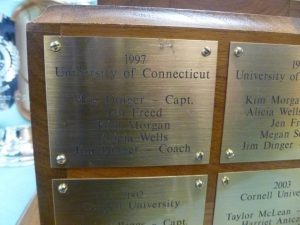 The Lady Huskies Overcome Many Hurdles to win the 1997 National Intercollegiate Polo Championship title–an excerpt from Dust and Determination: A History of UConn Polo by Helen Scanlon. COMING SOON!

The Lady Huskies were selected as a wild card team in the final four, just like the previous year. 1997 was looking and feeling a lot like 1996, but with some imposing speed bumps: Kim Morgan, the national championship player and animal science major from Springfield, Massachusetts, now a junior, was involved in an automobile accident early in the season, and her recovery time kept her out of the action for an entire month. Then, Meg Dinger’s shoulder injury added another dent to the team’s armor. And, since these things tend to travel in threes, Alicia Wells, also a junior and an experienced national championship player from Sykesville, Maryland, became ill with a nasty bout of the flu a mere three weeks before the national tournament. With plenty of rest and recuperation, Wells, a renewable natural resources major, bounced back like the champion she was and got right back in the saddle for some serious practice time a week before the team was nationals-bound.

The universe was testing the young women from UConn, but every obstacle and attempted derailment fed the fire and made them even stronger.

Dinger and Wells were not at full capacity when they headed to the Brushy Creek Polo Club in Burleson, Texas for the 1997 National Intercollegiate Polo Championships. Dinger’s shoulder was not completely healed despite months of rest and physical therapy—which further demonstrated how serious her injury was. Wells still felt the remnants of the flu that had left her bed-ridden only two weeks ago. No matter—illness and injury would not stop this runaway train: Dinger and Wells were tough, battle-scarred warriors ready to push through and bring the silver home again. Combine that high-octane tenacity with Kim Morgan completely healed from her injuries, and with the highly athletic and fiercely competitive Jen Freed at full-strength—you had something to make the opposing teams jittery.

Jittery was right. All that experience, razor-sharp discipline, unwavering commitment and ruthless work ethic came together to form a polo team that left spectators and opponents awestruck. The Lady Huskies began their final-four onslaught by taking down the highly talented South East Regional Champions, the University of Virginia in the semifinals, at 19-10. In the other semifinal corner, Cornell was busy wreaking their own havoc by obliterating the fierce Stanford University team.

The victories had UConn face-to-face with Cornell yet again.

In the first chukker, UConn scored five comet-quick goals to get the crowd gaping in amazement and hooting with excitement. The Cornell team rolled their spurs to get in two goals, but it wasn’t good enough to get them a lead by the first chukker. When Cornell had trouble with their ponies in the second and the third chukkers, UConn showed no mercy and claimed a six-point lead. For the final chukker, it seemed that Big Red resolved the pony issues and came alive, scoring five points. Not to be strong-armed, the Huskies, fueled by white-hot adrenaline, mirrored their rivals and claimed five more goals of their own.

So, now we know how this story ends.

17-11 flashed on the scoreboard at the sound of the buzzer, and it was done. The crowd erupted. UConn had done it again. The wild card women had defeated not only their longtime rival Cornell—but they had also defeated injury and illness to claim the top prize.